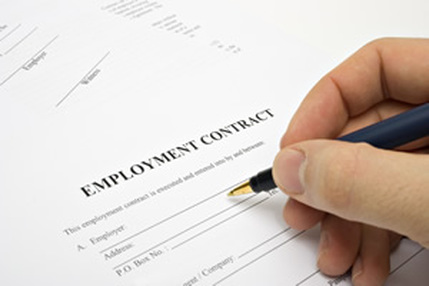 Employment Contracts
Any type of contract that is signed by all agreeing parties will stand in a court of law as binding. For this reason much care should be given in assuring the proper wording for all parties concerned. This is also the case for the terms of an employment contract which is drawn up between an employee and employer. When stating employee and employer rights and responsibilities within a working contract, terms must clearly indicate such rights or responsibilities for each party concerned. The statement of terms in the contract must be clear and concise such that there are no questions regarding each parties rights and responsibilities should a matter deem it necessary to pursue any type of court proceedings or intervention. Friedman v. Tappan Development Corp., 22 N.J. 523, 531 (1956)

The contract’s terms should always include two important items. One of these is the length of employment, particularly if it is for a set section of time. The date the contract will expire or terminate shall also be stated with clarity. The second item that is imperative to include in a work contract is all types of circumstances that will bring about the termination of such employment as well as terminating the contract. No matter what other terms may need to be included based on an individual business’ need these two items should be stated plainly.

All intentions must be clearly stated in an employment contract. Such contract will not become a year-to-year contract unless these changes are unmistakably stated in the terms of the initial contract. It will not be assumed by the courts that the contract automatically becomes a year-to-year contract unless the contract so states. Craffey v. Bergen County Util.¸315 N.J. Super. 345, 352 (App.Div. 1998), certif.. denied, 158 N.J. 74 (1999).