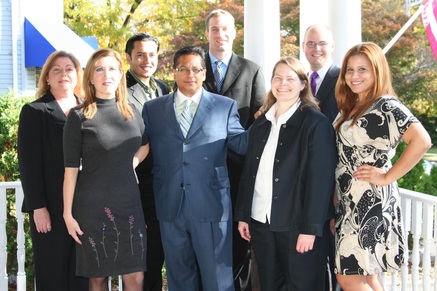 NJ Employment Lawyers
Tayeb Hyderally, Esq. is one of New Jersey's most prominent employment attorneys working in the ever-expanding and complex field of American labor laws. His knowledge and experience are all-inclusive when it comes to the large body of employment laws that govern New Jerseyans who are members of the U.S. workforce. As president of the employment law offices of Hyderally & Associates, PC, he and his colleagues offer their legal expertise daily to valued members of the New Jersey labor force. Here, Atty. Hyderally explains a little about some of the laws governing the employer/employee relationship today, for those who seek to better understand their workplace rights and responsibilities.

Over the past century, employment protection laws in the United States have gone through significant overhauls, especially due to the workplace dangers that existed in factories during the Industrial Revolution. Back then, it was almost a commonplace occurrence for factory workers to be injured or even killed due to occupational hazards. Additionally, employers sometimes forced employees, many of them children, to work exceedingly long hours for little pay. These were deemed as unacceptable working conditions, and the outgrowth of such situations was the establishment of a very important and ever-increasing section of laws known as employment laws, also referred to as labor laws. Today, employers are expected to know their responsibilities, and workers should know their rights in relation to their employment.

Employment laws are the body of laws, precedents, and rulings that govern the legal rights of, and restrictions on, the United States labor force. It's important to note that these laws apply to both employees and employers, which is why Atty. Hyderally and his associates recommend that all members of the American labor force know as much as possible about their rights and responsibilities concerning their individual workplace conditions as well as their relationship to their employees or employers. Employment protection laws regulate issues concerning such aspects of the workplace condition as the right to organize and negotiate collective bargaining agreements, sexual harassment, worker's compensation, wage and hour requirements and disputes, wrongful terminations, the Family Medical Leave Act, disability, and occupational safety, to name just a few.

It's also important to note that you don't have to actually be a member of the New Jersey workforce, either employee or employer, to fall under the body of employment laws that govern the state's workforce. Those who are currently seeking employment also have certain rights as job applicants. For instance, there are certain questions that prospective employers are prohibited from asking on job interviews. The questions asked of you, as a prospective employee, must pertain to the skills necessary to perform the job for which you are applying. New Jersey employers are not permitted to ask questions regarding your religion, marital status, sexual orientation, age, or any other question concerning protected characteristics that could result in discriminatory bias. If you're a job applicant who believes that a prospective employer has discriminated against you based on any protected status, especially if an interviewer has asked a question concerning any protected trait, contact an employment lawyer in NJ to schedule a consultation.

Concerning workplace discrimination, it's important for members of the New Jersey workforce to become educated on some of the more prominent laws governing the state's labor force. For instance, the New Jersey Law Against Discrimination, or the NJLAD, is one of the most significant laws governing the New Jersey workforce today. This law prohibits discrimination in the workplace based on any government-protected characteristic. If you're someone who has heard in the past of such protected statuses, it's important to also note that the list has been expanded in recent years. Today's protected characteristics include race, creed, color, national origin, ancestry, age, marital status, familial status, sex or sexual orientation, and service in the armed forces, and this list is not all inclusive. Another significant section of this law involves the illegality of discriminating against individuals with disabilities, when those disabilities do not or would not interfere with their performance of a specified job. Today, it is illegal to perform any kind of discriminatory bias against an individual with a disability during the hiring process, with the exception of a known disability interfering with the proper performance of essential job functions. If you are an individual with a disability who suspects you've been the victim of discriminatory practices during the hiring process for a job, contact an employment law attorney to discuss any possible wrongdoing.

The volume and complexity of today's employment protection laws may seem to some like overkill, but the fact is that the workplace can pose hazards that cannot be taken lightly and must be overcome as much as possible. Additionally, the employer/employee relationship is a vital part of the workplace, and the protection of this relationship is vital to keeping the economy of New Jersey, as well as the rest of the country, moving and thriving. Atty.