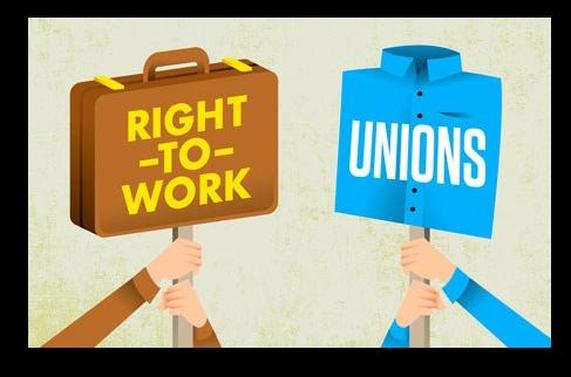 The Right to Work (also abbreviated as “RTW”) gives every American the right to work for a living without being compelled to belong to a union.  It gives them that choice whether or not they wish to become a member and pay the financial obligations, otherwise known as union dues.

The Right to Work Principle defined

People who favor the Right to Work principle believe that they should have the right to their earned pay check, without having to pay a certain percentage of their check to support a union through union dues.

Not every state is a Right to Work State.  Currently about half of the states in the United States are RTW states and this ratio is constantly changing.  No one could have been more surprised in December of 2012 when Michigan, so well known for being the automobile capital of the world and its large UAW membership,  became a Right to Work State.

What is a Right to Work law?

A Right to Work law guarantees that no person can be compelled, as a condition of employment, to join or not to join a labor union, nor to pay dues to that union.  This is cited in Section 14(b) of the Taft-Hartley Act which affirms the right of states to enact Right to Work laws.

What rights do employees in the non-Right to Work states have?

Being compelled to join a union, is compulsory in non-Right to Work states.  However, the Supreme Court of the United States has established certain parameters for employees not covered by the RTW laws.  They are:

Members can choose whether or not to join a union and union members may resign their  membership if desired.

Non-members may only be required to pay for their proportionate part of the union's proven bargaining costs.  That list of costs or fees must be stated, then the non-members have the right to challenge the list of costs and fees provided by the union.

Workers who are able to prove that their legitimate and sincere religious beliefs prevent them from joining or paying any money to the union automatically will permit them an exemption.

As of this writing, the State of New Jersey is not a Right to Work state.  If you have questions or concerns about how this fact impacts your company or small business, you should contact an employment law attorney in New Jersey who can help you understand the concept of the dues process and Right to Work.

How does the Right to Work law impact the economy for that particular state?

According to the National Right to Work Committee, the Right to Work states actually enjoy a higher standard of living and personal income growth than do non-Right to Work states, with greater economic vitality, faster growth in manufacturing and non-agricultural jobs, lower unemployment rates and fewer work stoppages.

Why do workers oppose union membership?

Besides extracting a portion of their pay check, unions essentially are offering a service to its members in exchange for those dues.  Workers can purchase the services of a union to handle negotiations with the employer… so, you might think that everyone should be 100% fine with that, right?  Well, if the union is delivering value, employees will be loyal customers.  If, however, the unions are spending much money on politics and policies that an employee opposes, or considers frivolous and not essential to those hefty dues they have paid, individual employees are entitled to and can fire the union.

It is important to note that not every employee in every trade, like construction or industrial jobs, belongs to the union, nor does every employee that works for the state or municipal governments, or those workers who are employed by the private sectors in states that are union shops (a term used to mean pay union dues or lose your job).  The Federal Government operates under open shop rules nationwide, though many of its employees are represented by unions.

It is also noteworthy that the Right to Work law does not prohibit limitations on when a dues deduction authorization card can be revoked, therefore any worker should always carefully read the fine print before signing off on such a card.

A quirky and modern twist on the Right to Work laws

Everyone was surprised when the National Labor Relations Board in Chicago ruled for the football players at Northwestern University that they were indeed employees of the university and were permitted to unionize.  The Board ruled there was enough evidence presented to show that the players were employees by virtue of the fact that they were paid in the form of scholarships, worked between 20 to 50 hours per week and generated millions of dollars for their institutions.  The athletes sought better medical coverage, concussion testing, four-year scholarships and the possibility of being paid.  Northwestern University acknowledged the ruling and quickly appealed and as of this writing a decision is pending.